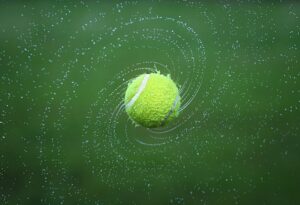 I know I can’t be helped so I just did it. At first, it was pretty low and then the 2nd catch came from a bit high up in the air.
“What did you feel?”asked the Captain.
“The 2nd toss was a bit difficult to catch.”
“And why is that?”
“Maybe, it got more speed or something.”
“Yes, of course.”
“So what do we learn?”
“What?”
“When something has more mass and it has more speed, it takes more force to change its state from rest or motion.”
“So, both of them are important?”
“Yes, they are. And the product of mass and speed is called momentum.”
“Woooow, and that is the 2nd Law?”
“Nope. But it is definitely related.”
“How?”
“Well, the rate of change of momentum is called Force.”
“That’s great except the fact that I didn’t understand what you said.”
“You know, just like the rate of change of displacement is speed and rate of change of speed is acceleration, rate of change of momentum is force which is equal to the product of mass and acceleration.”
“I still got a few questions but I’ll ask them later if you don’t mind.”
“I guess, it’s still too much for a young lad to take in. Then I’ll just end with the 3rd law of motion.”
“No experiments right?”
“You already did that lad.”
“What? When?”
“You kept the phone on the desk.”
“Yes.”
“The phone must have exerted some force on the desk.”
“Hmmm, yes.”
“Then why didn’t the desk break down?”
“Well, I don’t know. I’m no Newton.”
“It’s because the desk also exerted the same amount of force on the phone.”
“Wait! I think I know this. I have heard about it.”
“To every action, there is an equal and opposite reaction.”
“Wow.”
“But it only applies to physics. Don’t try to relate it to your everyday life.”
“Ok.”
“So, that’s it for now.”
“But I still got some questions.”
“Ask them then.”
“What is displacement? Acceleration? And…”
“I haven’t told you about this?”
“Oh sorry. It’s my fault. I got swayed away by the laws. I’ll explain them and a bit more about motion and Newton next time.”
“Really?”
“Promise of a Captain!”